Twelve songs — 10 in English and 2 in French — from singer-songwriter Elyse Bruce prove that her music is both current and timeless.  Recorded in Elyse’s home studio and mastered by composer/arranger/instrumentalist/engineer Gerry Dere, this CD not only touches the listener’s heart but also raises awareness of serious social issues that are part of our everyday lives.   The cover artwork was created by artist/author Thomas D. Taylor specifically for the Midnight In Chicago initiative. 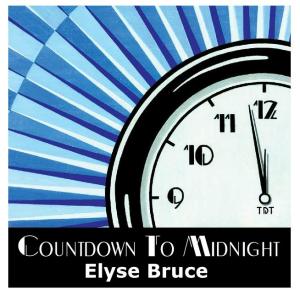 Available on Amazon by clicking HERE.

How Do I Begin To Believe
#7 on Southern Rock chart

Elyse Bruce’s “Countdown to Midnight” incorporates the stock trademarks she will soon be known for: gentle lyrics, tender vocals, and colorful arrangements. These are truly professional recordings in which no corners were cut. We sense this right out of the gate with the opening ballad “Late Night in the Borough” and continuing through other well crafted tracks such as “The Mad Hatter” and the saccharine sweet “When the Night Was Soft”. And with information on the back cover dealing with awareness to autism, we know her music is not just good, it’s actually about something.
~ A&R Select (Hollywood, CA)

Singer/songwriter Elyse Bruce has a long pedigree in music having studied classical piano in Paris and jazz in Canada with numerous musicians. That’s not even mentioning her impressive amount of on-stage and studio experience. But in her album Countdown to Midnight, Bruce seek more than just producing an album of both original and lite blues and pop: 20 percent of every sale goes to the Midnight in Chicago project, which seeks to raise awareness of autism, Asperger Syndrome, and Autistic Spectrum Disorders.

The album’s sales also help fund their educational pod casts (available free at the first site listed above), which Bruce hosts with MIC artist Thomas D. Taylor and the help of her own son, Lewis, who has Asperger Syndrome. With the twelve, simple pop, Elton John-ish arrangements, featuring Gerry Dere on keyboards and Doug Jensen on guitar for “Autoroute,” Bruce has produced a mature and cultured album most fans of classic pop will love. If there’s any complaint here, it’s all the business ads inside the liner notes. But since they’re also supporting a good cause, it seems a little petty to quibble about after all.

In an age when all the music industry can offer is the next Britney train wreck for us to watch, it’s nice to see someone actually trying to do something positive with their talent, while having fun at the same time. Countdown to Midnight proves that it can be done, no matter what time it is.
~ KConline (Kansas City, MO)